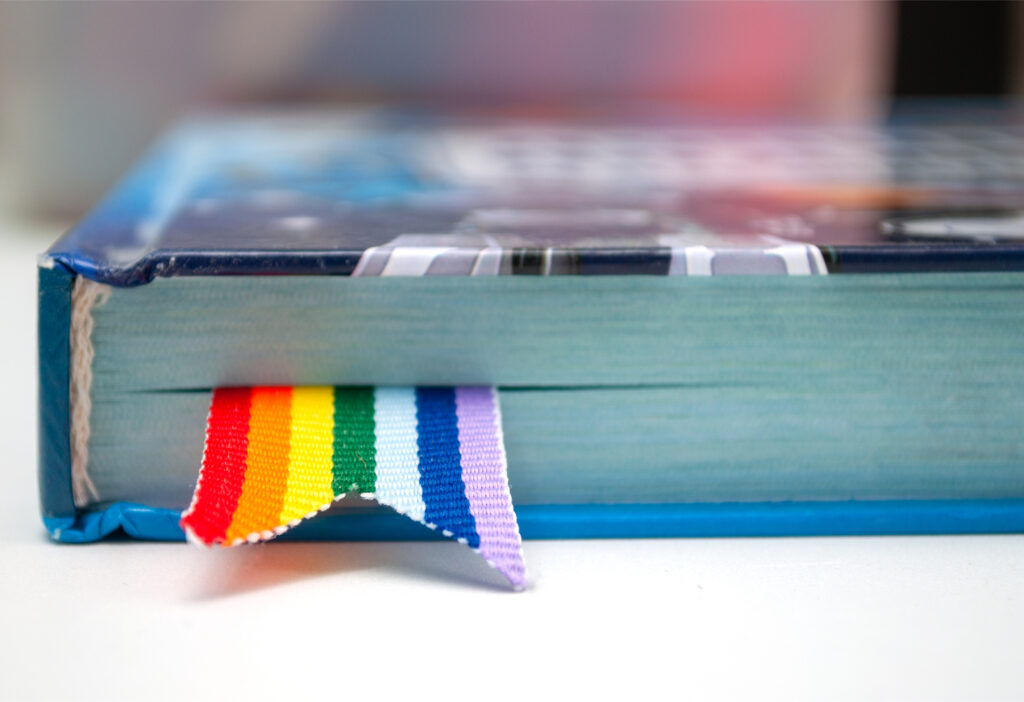 The LGBTQ+ community comes together across the world every June to celebrate Pride Month. While events actually take place throughout the summer, June was chosen to remember the Stonewall Riots that broke out in Greenwich Village, New York City on 28 June 1969. This month, as a special tribute to LGBTQ+ Young Adult fiction, Hâf Davies, librarian at Conwy Libraries, reviews 5 key, insightful titles for your reading list this year. 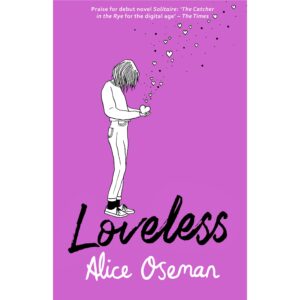 Loveless is a unique and empowering Own Voices novel about a teenager’s experience of self-discovery. Alice Oseman has detailed the main character, Georgia’s, entire exploration and discovery of being asexual and aromantic. This story is a learning curve for Georgia as well as the book’s readers, but it’s important to remember that Loveless tells the story of only one of many aro-ace experiences. The realisation of being aro-ace unfolded so clearly around Georgia but it was the support group of friends that encompassed her that made reading Loveless the most heart-warming experience. Something I particularly love about Alice Oseman’s writing style is the short chapters with blunt yet hilariously relevant chapter titles, a few of my favourites from Loveless were; Shakespeare and House Plants, We Sure Do Love Drama, Straight Out of a Romance Novel and Could Have Gone Harder with the Pride Flags.

Loveless is an incredibly important novel, but it isn’t just a novel for aromantic and asexual people. Alice Oseman’s fourth novel focuses on the importance of platonic relationships for everyone. There will be times when romantic relationships fail, when partners quarrel and fall out with each other, it’s in these moments that you will realise the importance of your platonic relationships. It is just as essential to love your friends as it is to love your partner, to be there for your friends when they need you so they can also be there for you. For anyone who’s attended a British university, I think you’ll find Alice Oseman’s depiction of university life incredibly realistic and relatable. Loveless explores and discusses the aro-ace identity, platonic relationships, self-confidence, past relationships, sexuality, gender identity, pronouns and so much more. Alice Oseman has packed this novel with essential and enlightening conversations and I would recommend this novel to everyone! 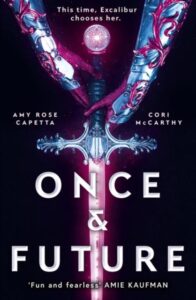 The Once & Future duology is a hilarious retelling of the Arthurian legend set in space written by two LGBTQ+ authors. Once & Future includes all the futuristic tech you’d expect in a sci-fi novel while staying true to the important elements of the Arthurian legend and incorporating some fun medieval ideas too. I was personally sceptical of this cherished tale retold in a futuristic retelling, but it worked brilliantly! The entire cast of this duology identify as LGBTQ+, including the main character, Ari, a female King Arthur in this lifetime who is pansexual, as well as all the famous Knights of the Round Table. Ari and Merlin formed a lovely friendship from the very beginning and Merlin added warmth and humour to any situation.

Once & Future is a very fast paced and enjoyable first novel and as soon as I’d finished I dived straight into the sequel. Sword in the Stars was a brilliantly schemed and entertaining conclusion to this duology. Unlike the first book, the sequel takes place back in time in Camelot itself. In Once & Future the characters connected themselves to their Arthurian counterparts whereas in the sequel it’s up to the characters to act out their parts in the legend to secure their trip forward in time to their own timeline. This entire duology is hilarious but I particularly enjoyed Merlin’s sarcastic comments about the very uneducated Middle Ages, he could lighten any mood. This is a fantastic duology that I would highly recommend to all sci-fi fans and particularly to anyone with a love for the Arthurian legend. 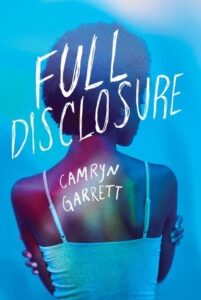 Camryn Garrett, a teen author, decided to take matters into her own hands when she struggled to find all the information she wanted on HIV and so she wrote Full Disclosure, an educational and modern take on a teenager’s life living with HIV. Full Disclosure is the first book I have read with a HIV positive character, it is a life changing kind of novel. This novel is an awakening of sorts and I’m sure that is exactly what the author intended. Novels like Full Disclosure humanise the people who suffer from this awful illness, it adds faces and names to individuals who deserve our support rather than the fear this illness has instilled in generations. Before reading the novel, I was completely unaware of how much misinformation is spread regarding HIV, and novels like this will help to eradicate the stigma around HIV.

Full Disclosure introduces us to Simone and her friends who are refreshingly confident in their sexuality, even when Simone is questioning whether or not she’s bisexual she’s self-assured in her decisions. Simone’s main concern is whether to divulge the information that she is HIV positive with her friends and boyfriend, she received hate for revealing this in her previous school so is naturally anxious about disclosing this secret to her new friends. Not only does Full Disclosure discuss the details of being HIV positive and the importance of keeping a low viral load, but it also covers many other key topics, from sexual consent to harassment and bullying. Although it took me a few chapters to become invested in this novel, it soon picked up and is based around such a relevant but rarely discussed topic that it is essential reading for everyone. Camryn Garrett has proved in just one novel, that she is a powerful new YA voice to watch out for, I can’t wait to read what she writes next. 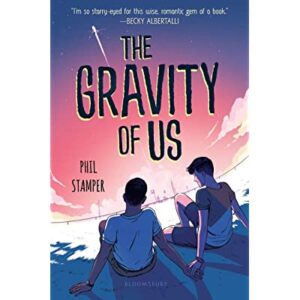 The Gravity of Us by Phil Stamper

The Gravity of Us is the brilliant story of a modern day space race and the effects of this on the families of the astronauts, particularly a teenage boy named Cal. Cal is about to finish high school and has ambitious plans of becoming a journalist. He regularly posts live videos about politics and NASA’s newest mission, Orpheus V, on his social media account with half a million followers. His future is set, until his dad is chosen as one of the astronauts for the mission, which uproots Cal’s life from New York to Texas. The Space nerd in me absolutely adored The Gravity of Us! As a millennial I have no experience of what the space race in the 1960s was like but I think this book re-enacted the situation in a modern setting, with the added pressure of live videos, social media and celebrity status, perfectly.

The author explores social media and media in general and how it can be used and manipulated depending on the users intentions and its effects on relationships, both romantically and familial. The writing was very easy to follow, the romance was cute and the inclusion of the transcripts from the aired reality TV show about the mission, were so fun to read. I listened to the audiobook and the use of a full cast was brilliant for the transcripts. The Gravity of Us was a very enjoyable read and I can’t wait to read the author’s second novel.

Cinderella is Dead by Kalynn Bayron

Cinderella is Dead is a unique story set two centuries after the famous fairy tale happy ending of Cinderella and her Prince Charming, however happy endings are definitely not in store for the residents of Lille. Young women are forced to attend a ball inspired by the fairy tale and there, men will claim their future brides based on their similarities to the famous Cinderella. This world where the story is based was shockingly sexist and patriarchal but it made the girls feminist mission to overthrow the system so much more important and potentially life-threatening. Sophia is your typical YA heroine who’s easy to root for but she’s also a lesbian, she is definitely the first lesbian Cinderella I have ever read about and I absolutely loved her! My heart broke for Sophia at the beginning of the novel as she begged her parents to find a way for her and Erin to be together in a world that would allow no such thing, this story is definitely an original twist on a retelling of a much loved fairy tale.

I read this novel very quickly, and thoroughly enjoyed the story, I couldn’t help but adore the character’s attempts at awkwardly flirting with each other! Cinderella is Dead is a stunning novel with a cover to match, everyone deserves to envision themselves as the heroine, as the fairy tale princess and Kalynn Bayron’s novel of a Black lesbian protagonist pulling down the patriarchy will warm the hearts of many.

The titles above are available to download from your library’s Borrowbox Collection.