Gwen was born and raised in Pembrokeshire, and now lives in Bristol. She has been able to work consistently in both Welsh and English, and her career as a translator has enabled her to translate her own novels. Her novels include two series located in Pembrokeshire – the first series is set in 1947, just after WW2, and her protagonist throughout is Della Arthur, a single woman in her 30s and the head-teacher of a small rural school. The second series is contemporary and set in the fictional town of Maeseifion which is the only constant as the protagonists change with every book.

Estyn Allan is a collaboration between Welsh public libraries to create digital content, led by the Society of Chief Librarians Wales (SCL Cymru) and funded by the Welsh Government. Crime Cymru is a diverse collective of Welsh crime writers, spanning crime fiction and non-fiction. Estyn Allan and Crime Cymru together introduce ‘Partners in Crime’, a series of videos featuring presentations by Crime Cymru writers.

Here is Estyn Allan in conversation with Gwen Parrott… 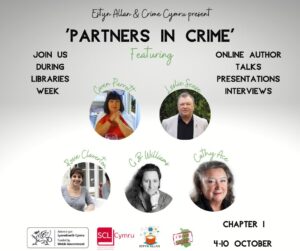 In conversation with Gwen Parrott [English-medium]