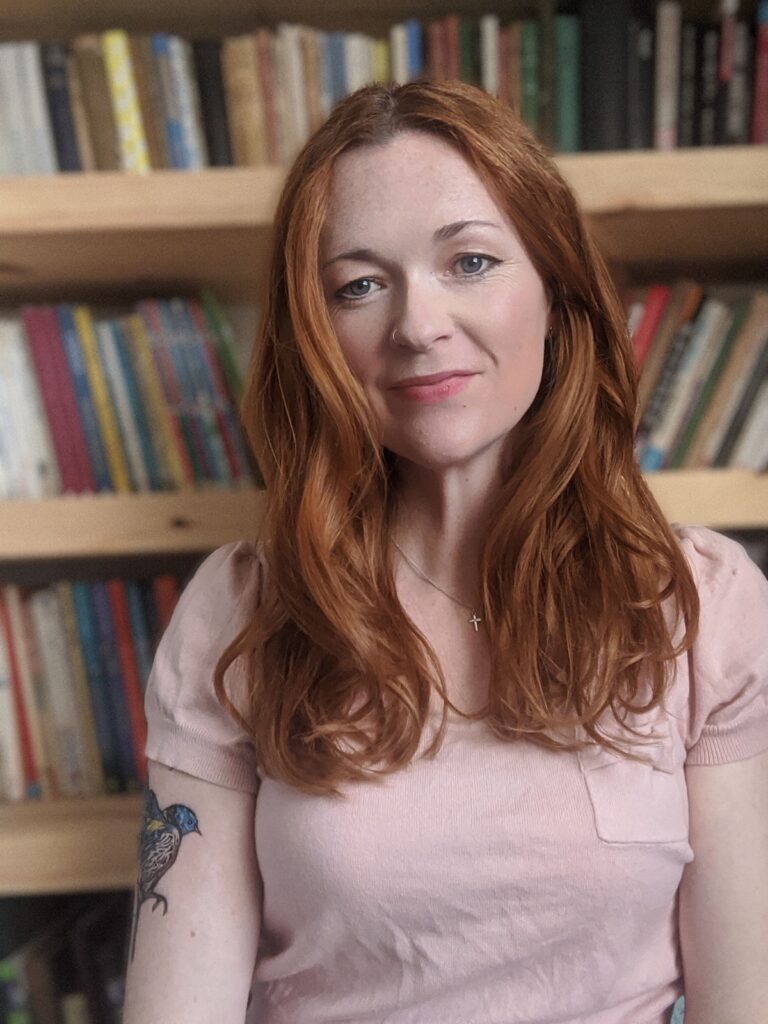 Manon Steffan Ros was born in Snowdonia and worked as an actress and musician before becoming a full-time writer. Manon has written over 23 books for adults and children in the Welsh language and has won the Wales Book of the Year for her adult fiction as well as being four-times winner of the Tir na n’Og Wales Children’s Book Awards. She has also won Eisteddfod and National Theatre Wales awards for her script writing. She lives in Tywyn in north Wales with her sons.

First written and published in Welsh, Llyfr Glas Nebo won the Prose Medal at the 2018 Eisteddfod and the triple crown of prizes at the 2019 Wales Book of the Year Award: the Aberystwyth University Fiction Award, the People’s Choice Award and the Welsh-language Overall Winner. It has since been translated into a number of languages including French, Arabic, Catalan, Spanish, Polish and English, where it has also been published in the US.

‘Dylan was six when The End came, back in 2018; when the electricity went off for good, and the ‘normal’ 21st-century world he knew disappeared. Now he’s 14 and he and his mam have survived in their isolated hilltop house above the village of Nebo in north-west Wales, learning new skills, and returning to old ways of living. Despite their close understanding, the relationship between mother and son changes subtly as Dylan must take on adult responsibilities. And they each have their own secrets, which emerge as, in turn, they jot down their thoughts and memories in a found notebook – The Blue Book of Nebo.’

What inspired you to write Llyfr Glas Nebo/ The Blue Book of Nebo?

I’ve always carried a fear of some unnamed disaster, and so I think it was only a matter of time until I attempted to write that fear out of my system. My parents were activists- although I doubt very much that they’d identify themselves that way- and I used to attend a lot of protests when I was very young, some of them for CND. I developed a real fear of nuclear disaster, and so this book is about me facing that fear and imagining not only the huge, significant changes that this would mean, but how it would affect the minute details of our relationships. 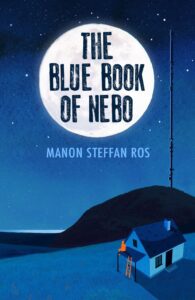 It’s about a mother and son and what happens to them when there’s some kind of nuclear disaster-they don’t quite know what and so neither do we- and everyone else disappears. They have to learn to survive without the basics of human comfort, and how to survive with no other people. It’s a book about the mother/son dynamic, but there’s a fair bit of joy in it too. I’ve heard it described by readers as a dystopia and a utopia, so I guess it reflects a lot on the reader too!

What were the key challenges you faced when writing Llyfr Glas Nebo/ The Blue Book of Nebo?

I always use my writing to process something significant in my own mind, and I remember finding it difficult to face the part of the story where the teenage son grows away from his mother- those steps towards independence are so natural and important but I’m a mam and it’s hard! The other part that’s always hard is when terrible things happen to the characters. I always grow to love them, and I create stories that put them through hell. I feel guilty!

What inspired you to start writing?

I lost my mam when I was young, and when I was pregnant with my first child, I hated the thought that my children would only know her as a still, unmoving, silent image in a picture frame on the wall of their home. I wanted them to feel like they knew her. So I wrote a novel for children- Trwy’r Darlun– and featured my mam as a main character. Siân in Trwy’r Darlun is funny and strong and loving and loyal and she’s my mother. It was the best way I could think of to bring her to life for my children. That was my first novel, some 15 years ago. 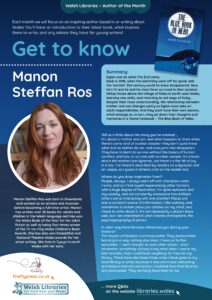 Where do you draw inspiration from?

People, always. I always start off with characters when I write, and so I find myself experiencing other humans with a huge degree of fascination. I’m quite awkward and shy socially, and am constantly amazed at how brilliant others are at interacting with one another! Places are also a constant source of information. I like walking, and sometimes a certain place just catches on my mind, and I have to write about it. It’s not necessarily a place I know well, but I am interested in what creates atmosphere, the psychogeography of places.

Do you have a favourite character that you have written? If so, who, and what makes them special to you?

I love them all, even the baddies! I do feel particularly close to Rowenna from The Blue Book of Nebo – she is imperfect and insecure and she has stayed with me in a very real way.

I also think back to the protagonists from the novels I’ve written about football – Fi a Joe Allen and Fi ac Aaron Ramsey. Marc and Sam are young men who love the beautiful game and find great solace in it, and – perhaps oddly as a woman in my late 30s! – I feel I have a lot in common with them.

I can only speak for myself, but I have to spend a lot of time with my characters before I write. Sometimes I write characters who behave despicably, and I have to find things to love about them. I also rely a great deal on instinct, so if something is boring to write, it will be boring to read! It’s taken many years to trust that instinct in myself though. And overthinking kills creativity. It’s a story, it’s words. I have to trust it to find its way.

I could fill pages and pages here! I can’t remember a time when books weren’t keeping me company. I loved the work of Tomi Ungerer, particularly Alumette, and Anthony Browne (I’d LOVE to write a novel about his book, Gorilla!). I still go back to Boy by Roald Dahl every year – I must have read it every autumn for the last 30 years. Anything by Judy Blume or Paula Danziger, or Gwenno Hywyn or Mair Wynn Hughes. I was very very lucky to have a brilliant teacher in Year 6 (Gwenno Jones), who read to the class at the end of every day, and those books have stayed with me. Stig of the Dump, The Iron Man, and O’r Tywyllwch. 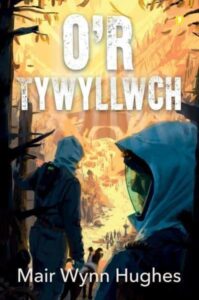 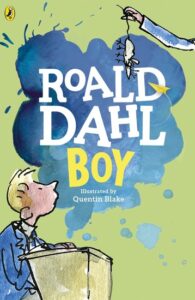 They change all the time, and I’m enjoying a lot of sci-fi at the moment – John Wyndham and Jules Verne particularly. Roald Dahl somehow manages to make his reader feel like part of the story – I remember being away from home when I was a child and fretting for Mam, and reading the BFG and feeling less alone. In Welsh, T.H. Parry Williams, E. Tegla Davies and Megan Angharad Hunter are current favourites of mine. (I will chastise myself later on for leaving so many people out!)

When I’m in the zone of writing a novel, I don’t read fiction at all – I have to live in the story I’m creating and refrain from getting pulled into the stories of others! I’m midway through writing a novel at the moment, and so the books on my bedside table are non-fiction. Levithian by Phillip Hoare, which is a personal and warm account of one man’s fascination with whales. The other is called Reality Is Not What It Seems – The Journey to Quantum Gravity by Carlo Rovelli, a writer I can’t get enough of at the moment. The way he writes about physics is poetic and accessible without oversimplifying. Hundreds of ideas for sci-fi stories spring out of every page! His book, The Order of Time, messed with my mind in the most wonderful way.

The impact of libraries is immeasurable. They democratise learning in a way nothing else does. I have no further education – I went straight to work after school – and I remember something clicking in my mind when I was in my late twenties, that I could learn anything for free via my library. There have also been times when I have gone to my local library to write, because it was warm and welcoming and had an internet connection. I realised then that libraries are sanctuaries. They certainly have been to me.

It’s easy to slip into negativity about this, but children and young people do read a lot, just that it tends to be online. Adults should learn to respect that, I think, and not demonise the written word just because it’s on a screen. We can’t afford to pitch books against ipads! Also, not to think too much about the categorisation of books – many young people would enjoy books marketed at adults, and many children who are expected to enjoy chapter books would still enjoy picture books.

The Blue Book of Nebo will be published by Firefly Press on 6 January.

Read our Get to Know the Author flyer for further information about Manon Steffan Ros and The Blue Book of Nebo. See also our Authors of the Month writing in Welsh.