The 1921 Census of Wales and England became available online for the first time on 6th January this year.

The release is the culmination of a three-year digitisation project carried out by the genealogy company, FindMyPast, on behalf of the UK National Archives.

The documents are available to view for free at the National Library in Aberystwyth – and in England, at the The National Archives in Kew and Manchester Central Library.

The records, collected more than a century ago on 19th June 1921, reveal new details about the nearly 38 million people living in Wales and England at that time.

Historians, researchers and amateur genealogists will be able to trace where individuals and their families were living and working, as well as the languages they spoke.

FindMyPast, also the first to publish the 1911 census, says that the 1921 census was ‘the most revealing record set up to that time’.

‘It was the first census to recognise divorce, and to capture people’s employment details,’ the company adds.

‘For the first time, you’ll see all the family secrets and surprises that this interwar census brings’

© Crown Copyright Images reproduced by courtesy of The National Archives, London and FindMyPast.

Historian Louvain Rees, who is currently co-authoring a book on the lives of Welsh asylum patients, said of the release: ’The information collected on this census will help me immensely.

‘I will be able to track the women that I’m currently researching, hopefully giving me an insight into their personal circumstances before admission to the asylum, as it now includes previous employment and marital status – which is information I may not already have.

‘This census is particularly important for historians, as it was the first following the First World War. It will give us a new insight into post-war Wales, like the employment of soldiers after demobilisation, and the number of soldiers in institutional care.

It shows us the effects of the war on family units, including a higher number of women listed as widows. The 1921 census shows that 730,000 children are listed as “father dead” vs 260,00 listed with “mother dead.” 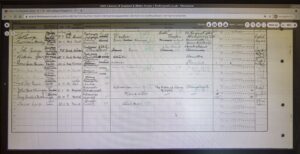 Entry for Sir John Ballinger (1860-1933), first Librarian at the National Library of Wales. © Crown Copyright Images reproduced by courtesy of The National Archives, London and FindMyPast.

In order to access the 1921 Census at the National Library of Wales in Aberystwyth, you will need to register for a reader’s ticket, that can be done online. At the moment there is no booking system, however, this will be constantly under review depending on the demand, so check before you visit. There is a charge for obtaining a copy of each single record transcript.

The National Library of Wales, Aberystwyth.

The census is a record-taking exercise that occurs every ten years – the most recent for Wales, England and Northern Ireland took place in March 2021, while Scotland’s census is planned for later this year. The information provided informs governments, charities and other organisations plan and fund for the needs of different demographics across the country.

Beryl Evans, Family Historian at The National Library of Wales, said that although many people use the census to look at their family history, there’s a lot of people searching ‘the history of their houses and of course social history.’

A century-old census is released once a decade, though the next one won’t be available until January 2051.

Beryl said: ‘The 1931 census was taken but unfortunately it got destroyed by fire and the 1941 census was cancelled due to World War Two, so the next one will be the 1951 census released in January 2051 – hopefully I’ll be alive to see it.’

The results of the 2021 census will be released in phases over the next two years, with the first release expected in spring this year.